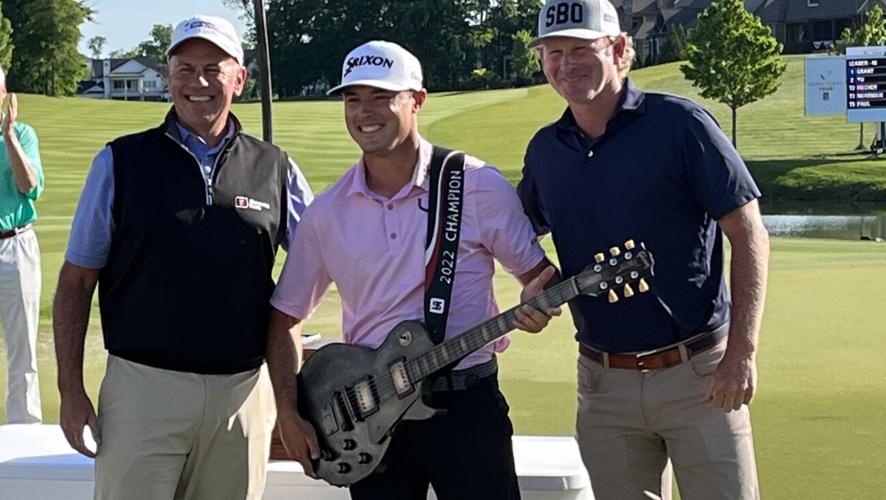 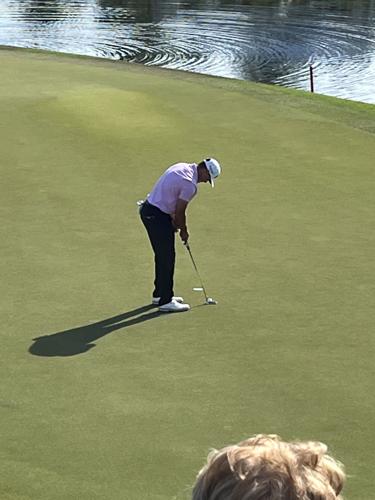 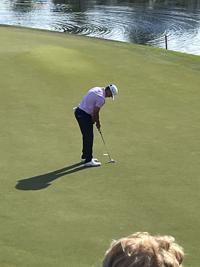 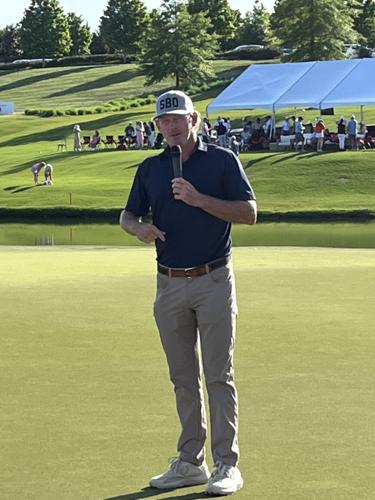 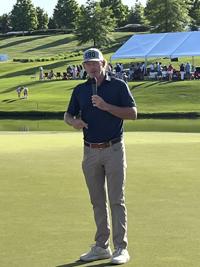 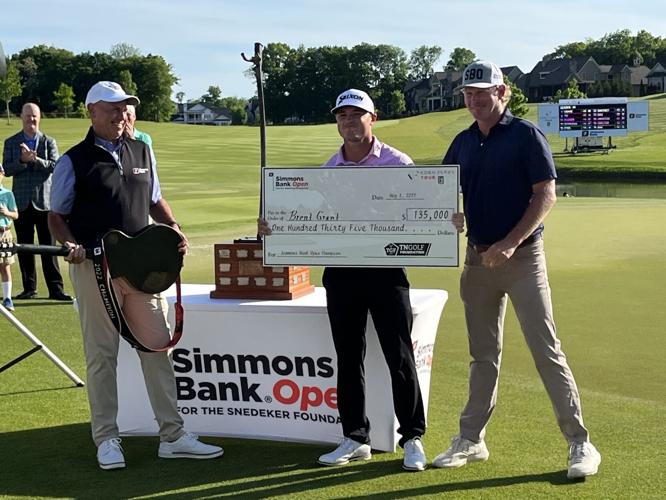 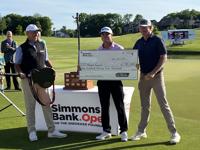 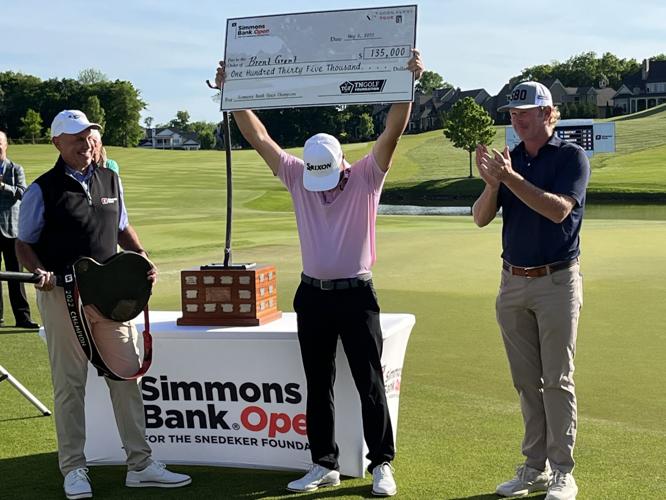 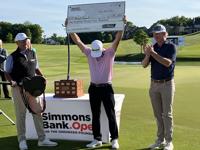 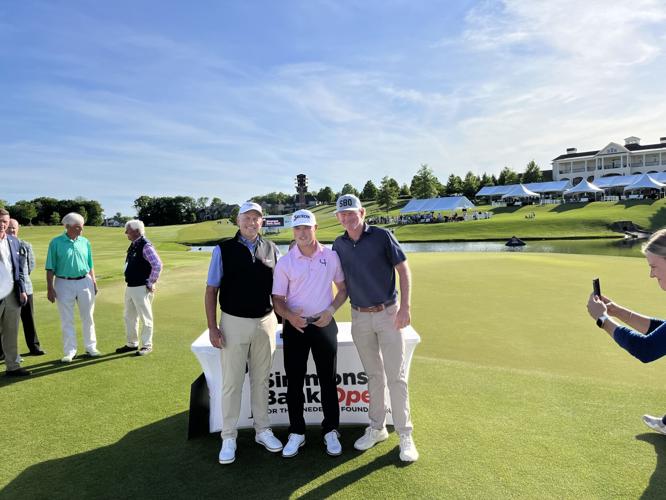 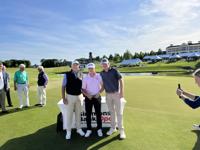 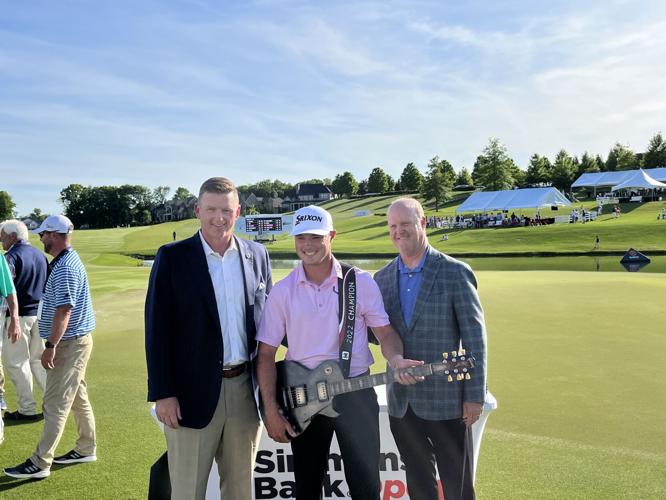 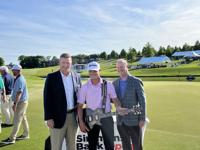 COLLEGE GROVE, Tennessee – Brent Grant held tears back for as long as he could, but mere minutes after Kevin Yu’s potential playoff-forcing 11-footer for birdie on the 72nd hole caught the low-side lip and trickled past the hole, he let it all out.

Grant, who until his early 20s thought a professional golf career would be relatively “stupid”, equating it to a coin toss, two-putted for birdie at the par-5 18th and reached 16-under par, ultimately enough for a one-stroke victory over Yu at the Simmons Bank Open for the Snedeker Foundation.

Grant, a 26-year-old who plays from Honolulu, Hawaii, welled up again after the trophy ceremony for his first PGA TOUR-sanctioned win.

“One small step in the journey, and I’ve felt like I was two steps away from really getting where I really want to go in life, and this gets me one step closer,” said Grant, who carded a 3-under 69 Sunday at The Grove.

Grant entered the final round in T2 position, one stroke behind Yu, who held the outright lead at 14- under par. A quiet 2-under 34 on the front nine kept him in the hunt amid a crowded leaderboard. Grant countered a bogey at the par-4 10th with a birdie at the par-3 13th, then drove the 317-yard par-4 16th and two-putted for another birdie, giving him a two-stroke lead.

A rare failed par save attempt at the par-4 17th dropped Grant back to 15-under par and into a tie with Yu. It was just the third failed par save of the week for Grant, who finished 14 for 17 scrambling, tied for first in the field.

Grant smashed a drive up the left side of the 18th fairway, knocked an iron onto the front of the green and unleashed a club twirl his idol, Tiger Woods, would be proud of.

Grant’s eagle putt to the backcenter hole location carried enough speed to run off the green, but it hit the center of the cup and nearly went down, hopping out and leaving him with a kick-in for what became the tournament-winning birdie.

“It was going in the water,” Grant said. “There was no doubt. I hit that putt and then held my breath… it was going Mach 4 right at the back of the hole, and thankfully the hole was strong enough to stop it. I wanted to make eagle. I thought for sure (Yu) was going to get it up and down (for a tying birdie).”

Grant’s parents were not in attendance, but as he shared a hug with Ryan Pozar, one of his closest friends who was there at the start of this unlikely run to the winner’s circle, both of them broke into tears.

Pozar, 15 years Grant’s senior, remembered how the head professional at the Navy-Marine Golf Course in Honolulu paired him with a young teenager just beginning to play the game. Grant’s father served in the United States Navy, as did Pozar and his father. Pozar dusted Grant with ease, but the youngster kept coming back, kept asking questions.

Instead, Grant worked at two golf courses and a golf shop, then became a demo day representative for a major equipment company. Grant played some United States Golf Association amateur events with Pozar on the bag, but he was not entirely sold on a professional golf career.

“I thought it was kind of stupid to basically toss a coin in the air and hopefully it lands on heads,” Grant said. “When I finally decided to do it, it took a little bit.”

The life-changing moment came after Grant Monday qualified for the 2017 Sony Open in Hawaii. In a practice round with Anirban Lahiri and PGA TOUR winner Ken Duke, Grant got an unexpected confidence boost from one of his practice partners. “Ken pulls me aside afterwards and says, ‘Son, if you hit every shot the way you step up and hit it on the tee, you’ll make it out here in no time,’” Grant said. “At that point, I pretty much decided to turn pro.”

Grant’s first run at Korn Ferry Tour membership fizzled out at Second Stage of the 2017 Korn Ferry Tour Qualifying Tournament. A year later, with Pozar back as his caddie, Grant advanced to Final Stage and earned membership, but a T118 finish left him buried on the priority ranking.

Grant played a handful of events on PGA TOUR Canada in 2019 as he prepared for another run at Final Stage. The third time was indeed the charm for Grant, who finished T21 at Final Stage in 2019 and earned guaranteed starts for the first eight events of what became the 2020-21 season.

A pair of T5s, one of which came at last year’s Simmons Bank Open for the Snedeker Foundation, propelled Grant to No. 63 on the Regular Season Points List, high enough for fully exempt status in 2022.

A wrist injury, however, left Grant in pain and considering early retirement.

“This time last year I was in the clubhouse during a rain delay and I told (player relations) I was pulling out for five weeks,” Grant said of last year’s final round at The Grove, where he began the day with a share of the 54-hole lead but settled for T5 after a 2-over 74.

“I was in a lot of pain. I finished the round… but I wanted to win. I had a torn ligament in my left wrist. I couldn’t move my wrist a certain way without sending jolting pain up my whole entire arm. I had probably 15 hours of conversations with my dad after I got home after this tournament last year.

“Fortunately, I overthought it. Three weeks later, after not touching a club and doing a lot of (physical therapy), I was able to hit balls and be at full speed, and I haven’t had pain since.”

Grant entered the week ranked No. 88 on the Regular Season Points List, largely off the strength of a T6 six weeks ago at the Lake Charles Championship.

Sunday’s win moved him to No. 12, putting him in contention for his first PGA TOUR card at regular season’s end.

Grant said if professional golf had not worked out, he would have joined the military. Pozar said Grant would have been a fighter pilot. Grant played golf with a fighter pilot’s mentality for much of his career, bombing it off the tee, firing at flags and chasing birdies.

This week, just Grant’s 45th start on the Korn Ferry Tour, it was bogey avoidance, not piles of birdies which made the biggest difference. Eleven players made as many or more total birdies than Grant (one eagle, 19 birdies). Only one player, however, played fewer holes over par than Grant, who made three bogeys and one double bogey across four rounds.

“For (Brandt Snedeker) to give me that trophy, look me dead square in the eye and tell me he would see me on (the PGA) TOUR, that’s all I need,” Grant said. “I’ve never been more certain I’m going to make it on the PGA TOUR and win on the PGA TOUR.”